In Orlando Japanese Food Is More Than Just Sushi

Japanese food is not just sushi! It’s like saying “Italian food is only pizza and pasta,” or American food is all hamburgers and hot dogs (well, maybe that one fits:). At any rate, We have to thank 1st generation restaurateurs’ for using sushi to put Japanese food on the global map, but I have to say… it’s not the sum and substance of Japanese Cuisine!

Growing up in Japan, sushi wasn’t really on the menu. Meals consisted (mostly) of miso soup, white rice, and tsukemono pickles. The family table was set with vegetables pulled from our garden, fresh beef, grilled local fish, hand raised chicken— and there was always something simmering for hours in a secret broth rich full of umami before we had to work long hours at the farm. Looking back, I now know that the amazing cooking was a bribe to fuel us up for a long day of hard work (we didn’t have Red Bull)!

If you were to join us at my childhood table, you’d be amazed by the colors and options. Although not a professional chef, my grandmother (she always did the cooking) emphasized vivid, sensory experiences, encompassing menu arrangement, cooking techniques, course sections, taste, texture, and aesthetics details. She didn’t do this to impress us, she did it naturally—from her soul. And that’s what makes a truly great chef!

In this post, we’ll do our best to not just talk about sushi, but to take you on a tour of Orlando Japanese Food. Hopefully, we’ll open up your mind and imagination to the cooking styles, and traditions of Japanese Cuisine. If it’s too much to take in, don’t worry… you could always take the easy route and join us for dinner (but PLEASE order more than just sushi.  😉 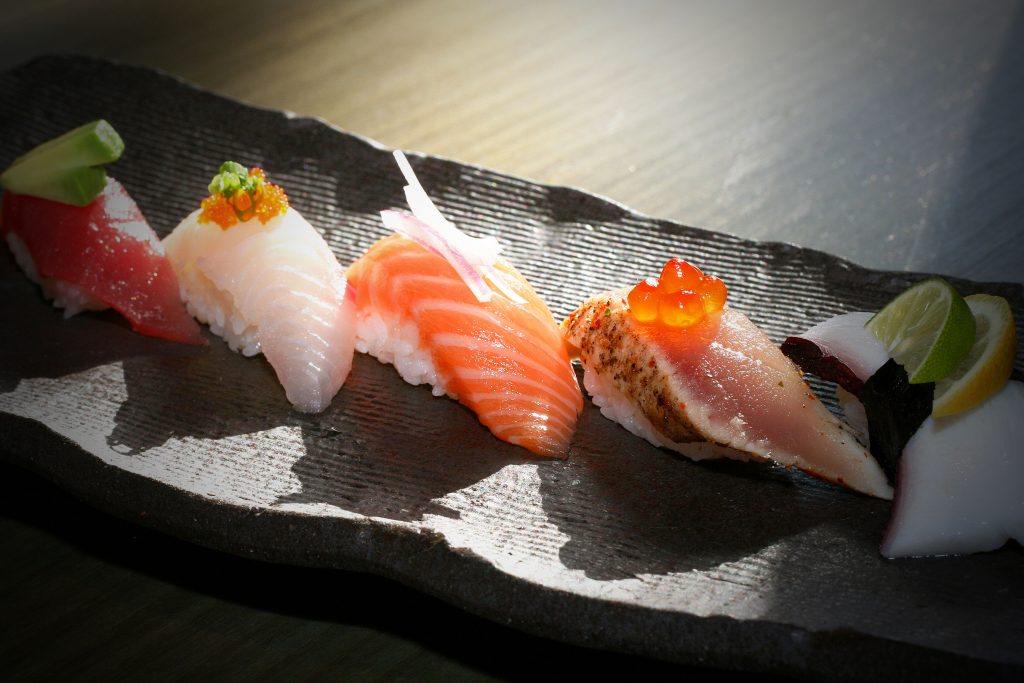 We have to start with the one that put Japanese Food on the Western map—sushi. Sushi is vinegared rice topped with different ingredients; ‘sushi’ means ‘sour-tasting’. It is generally prepared with raw seafood, but may also use cooked ingredients. Originally, sushi was fermented fish with rice, preserved in salt, and a staple dish in Japan until 1603. In Japan, sushi is a simple dish containing one type of fish or vegetable. This is in contrast to western-style sushi, where anything goes, from avocado to spicy mayonnaise. Purists prefer not to disrupt the fresh ocean flavor of the fish with non-traditional ingredients and sauces….But, what’s wrong with a little variety?

Originally, sushi was fermented fish with rice, preserved in salt, and a staple dish in Japan until 1603. In Japan, sushi is a simple dish containing one type of fish or vegetable. This is in contrast to western-style sushi, where anything goes, from avocado to spicy mayo. Purists prefer not to disrupt the fresh ocean flavor of the fish with non-traditional ingredients and sauces….But, what’s wrong with a little variety now and again? 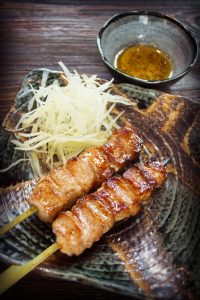 Robatayaki is a traditional Japanese Food. It’s a barbecue cooked before customers and served to them directly by the chef. Its origins date back to the Miyagi Prefecture, where the first robata restaurant was formed. In this style of cooking, the chef takes his position on a deck surrounded by ingredients. You just have to point out to the ingredients you want and he will slow-grill them on hot Binchotan charcoal right before your eyes.

While we do have an amazing Robatayaki inspired experience in Gainesville, our robata experiences at Dragonfly Robata Grill & Sushi in Orlando, (where we recently rolled out an authentic Robata Experience dinner), or Dragonfly Izakaya & Fish Market in Doral should not be missed. 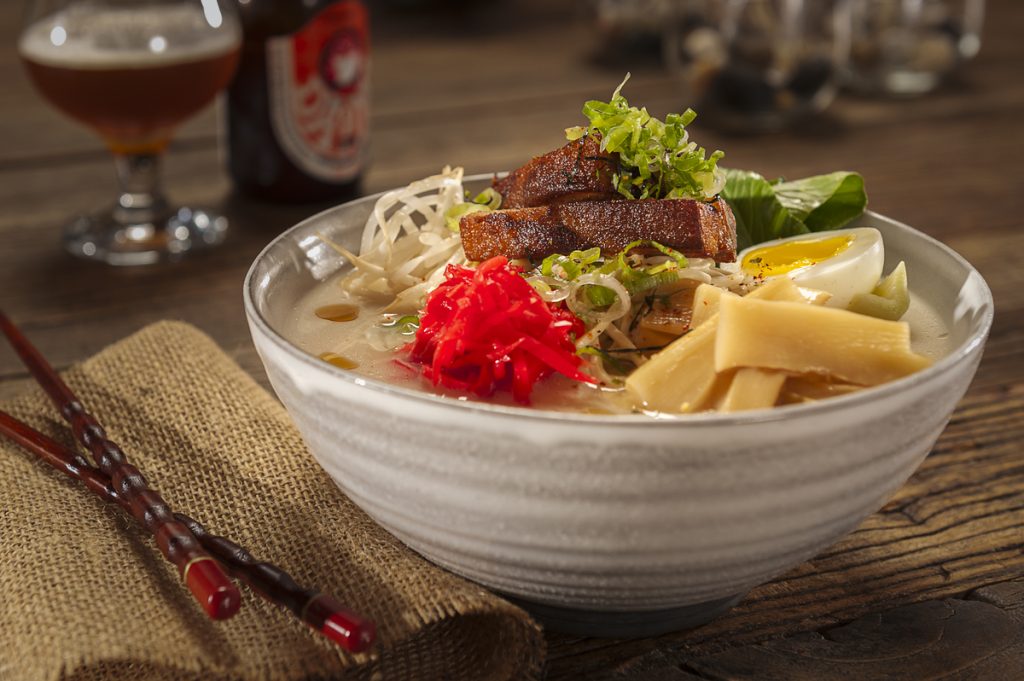 Ramen is Chinese-style wheat noodles in a fish or meat broth. Miso or soy sauce are the common flavoring agents, and toppings include thin cut pork (chashu), nori (edible seaweed) and negi (Japanese green onions). Each region in Japan has its own variety of ramen. In Orlando, our ramen is packed with umami to really highlight the Kurobuta pork or braised short ribs. 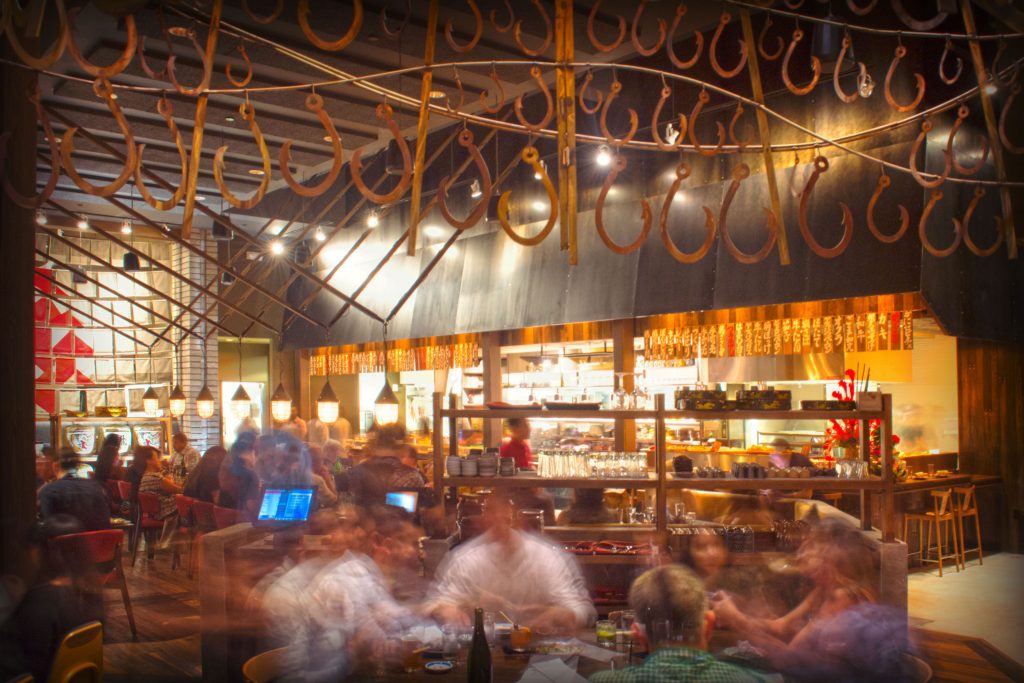 While izakaya has befuddled the west, we’ve been doing it since opening our Gainesville Florida location in 1999! Some call it a cross between a Spanish tapas bar and a British gastropub—we all it authentic Japanese Food! At a traditional izakaya, you’ll be served salty, savory, crunchy or spicy bar food artfully pair great with wine, beer, shochu, sake, and spirits. Though considered a casual place to eat and drink in Japanese Cuisine, an izakaya is a feast for the eyes with its amazing array of eats, from chicken wings and octopus balls, to tofu, pickles, and noodle bowls.

Okonomiyaki means ‘grilled as you like it’, and came about from the practice of cooking leftovers in pancake butter. At an okonomiyaki restaurant, you can choose the ingredients you want for your pancake. Common ones include vegetables, noodles, seafood, pork, cheese and Japanese rice cake (mochi). 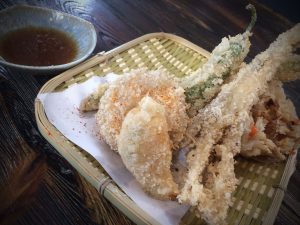 Tempura is a well-known Japanese Food. It’s prepared by coating seafood or vegetables with a batter of eggs, flour and water, and frying in oil. The batter-frying concept dates back to the mid-16th century and is influenced by the Portuguese. Tempura is commonly served with ten-tsuyu (a dipping sauce made using fish stock, soy sauce and mirin). It can also be sprinkled with salt or topped with soy sauce. Making great tempura requires a dedication to making the perfect batter.

Udon is a type of Japanese noodles that are thick, chewy, and taste delicious whether they’re eaten hot or cold. They are served in hot dashi, a broth made with kombu (kelp) and bonito (thin flakes of dried and smoked tuna), and topped with scallions. In Japanese Cuisine, there are other ways to eat udon, including with fish cakes, tempura, by stir frying them, or serving them cold with a soy-based sauce. Udon is kinda like Ramen’s bigger brother. 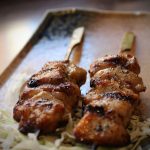 Yakitori (in it’s purest form) is grilled chicken skewers, usually served as a snack to accompany alcohol. Small bite-sized pieces are cut from different parts of the chicken, skewered and roasted. They are then basted with a soy-based sauce called Tare, salted and served.

Yakatori stands can be found all over Japan, New York, LA, and San Fransico. They range in status from basic late-night street fare all the way to Michelin star rated restaurants. The best Yakitori is made by grilling with authentic binchotan charcoals. Binchotan coals create an ultra-high heat (up to 1,000°), that sears in flavor and produce little to no smoke. 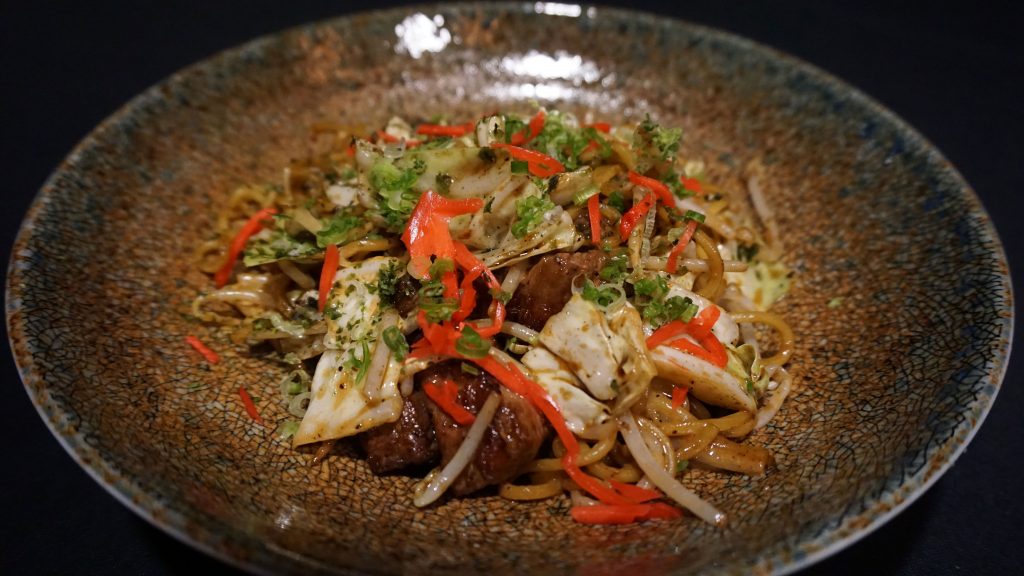 While not really a set category or style, Comfort Foods are an important part of any conversation around cuisine—Japanese Food included! Any food that rekindles a taste of home and brings back memories of childhood can accurately be considered comfort food. Comfort Foods are often associated with mental well-being (slurping hot soup or biting into fried chicken!), and can help you through dreary days and make you feel better.

What are some of the Japanese versions of comfort food? Miso soup with rice is a classic, as are rice balls (onigiri) and a tempura of lightly battered and fried vegetables. Rice porridge (okayu), udon noodles, chicken yakitori, stir-fried noodles/yakisoba, and Natto (fermented soy beans) over steaming hot and fluffy rice are a few others that come to my mind. For older folk, comfort food may be Okonomiyaki, which they may have savored as kids during WWII at penny-grills known as issen-yaki. Regardless of your childhood, we all have something that we would consider comfort food.

As you can see, Japanese Food is as diverse as any other. It’s rooted in tradition, flavor, color, fresh ingredients and is artfully prepared with love. We do hope that you’ll consider branching out and trying something off your typical beaten path next time you visit, but if you’re set in your ways….Sushi is always a great fall back!